Black Garden is a free Adult fantasy RPG game about a young adventurer who gets defeated by the “Demon Lord” and is forced to become her minion. Starting at the lowest rank in the Demon Realm’s army you are sent to a remote Goblin village to help with morale. You soon discover that the Demon Realm is populated mainly by lusty female Monster Girls and that your role as a minion of the lowest rank primarily involves being the village bicycle to raise morale and minion numbers for the Demon Realm’s army. Will you rise through the ranks using your hard work and dedication, or will you sleep your way to the top and reclaim your stolen soul from the “Demon Lord”? The game is not heavily plot focused and is designed to give players significant freedoms in how they approach their day to day lives as they build up their reputation with the locals and explore the ever expanding world. Black Garden features a myriad of fetishes with the primary focus being on femdom. However, it is possible to avoid all sexual encounters by focusing on the exploration, farming and crafting aspects of the game. 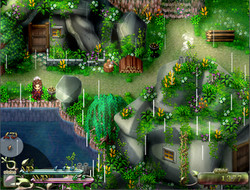 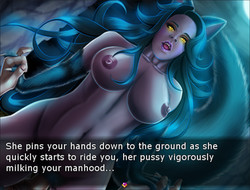 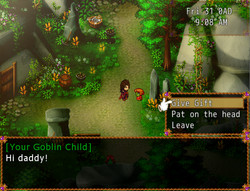 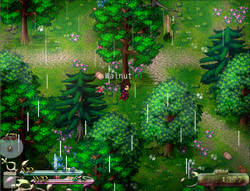 v0.1.5
New Tier 4 Patrons added to Credits!
Winter’s Day event has been removed along with most of the event craft materials until next year.
New Map, Amber Wilds, was added to the game. You can find the entrance North of Garnet Weald. Amber Wilds connects the lower and upper regions of Garnet Weald.
The new map features an Autumn themed biome with significant sand stretches that can generate Fulgurite when struck by Lightning. These stretches of sand have specific drops that generate on them, such as Quartz, Coins and Smooth Sand.
The new Werebat enemies are patrolling Amber Wilds at Night and are harder to detect than Werewolves.
Werebats have a unique defeat mechanic where they will force you to wear a cursed piercing that will over time inflict permanent negative traits on your character if not removed quickly enough. The Piercing can be removed by the Goblin Smith for a small price or by using the “Remove Curse” scroll.
Chaos Turkeys can be raised on your farm to produce Eggs and Chaos Feathers. A Chaos Egg must first be procured by defeating the wild Chaos Turkeys (5% drop chance) and placed inside a Turkey House (constructed or found in chests).
A randomly generated Hunter Camp spawns in Amber Wilds, containing one NPC Hunter. This NPC can give an optional side quest line to hunt various creatures around the forest. Completion of the Quest involves the defeat of a side Boss and acquisition of a Title and Bonus Stats. Hunter Chest and Cook Pot can be looted once a day with no consequences once the Quest line is complete.
Hunters sell various creature drops and can be robbed or enslaved like other Traveling NPCs. They will respawn after about a week if defeated.
A side Boss enemy has been added to Amber Wilds to protect the fruiting bushes in a ravine. The Boss has a four day respawn timer after being defeated.
Maple trees replace Juniper as the wood gathering node in Amber Wilds.
Maple Leaves can be turned into Maple Syrup or fed to a Chaos Turkey to obtain Chaos Feathers. Maple Seeds can be used to produce Flour.
Prices of some creature drops and materials have been adjusted slightly.
The [Fear] status can now last up to 3 turns.
Ranger Tunic has been buffed to give +5% Evasion (previously 2%).
Lowered price of Perception Skill when learned from enslaved Soldier by 50%.
[Silence] status has been reworked and now lasts 10 turns in combat or 2000 steps out of combat unless cured with Throat Drops or sleeping for 8 hours. You are now unable to speak to NPCs or work in the Brothel while under the effect of [Silence].
Slime’s “Force Feed” attack no longer has a chance to inflict [SIlence].
T2 Beds now offer the option of sleeping for 4 hours with reduced restorative effect.
T3 beds now offer the option to choose the exact number of hours to rest. Sleeping less than 8 hours will give a proportional, reduced effect of restoring your VP and WP, it will also not cure any status effects.
The icon for Salt material has been changed.
Winter Coats (a test item that was added initially by mistake) have been removed and 10 SIlver Coins have been added per Coat to any players that got them as loot by mistake.
The effects of Stealth and Entomology Specialisations on success of gathering Bee Hives have been increased.
Beehives now mention that Entomology plays a role in success when gathering from them.
Beehives can now only be fought or gathered once per day.
Fixed a bug with Lotus Plants.
Seed descriptions now mention whether they will form a plant that regrows fruits/leaves.
Fixed a multitude of clipping issues in Emerald Falls that affected large plants and furniture.
Fixed a bug that prevented you from placing down a Spider Farm if you didn’t own a Shovel!
Removed bug that made Blade Flurry impossible to evade.
Significantly reduced the time of crafting when making items in bulk based on a suggestion.
[Paralysis] chance from Slime attacks has been lowered from 20% to 15%.
Fixed Alcohol brewing bug that scrambled name of keg and number of drinks (hopefully).
Increased Acrobatics and Sorcery damage scaling for Fire Punch, Ice Punch and Lightning Punch combat skills.
You can no longer enter Garnet Weald until you have seen your house at the start of the game.
Varenye requirement in Saffron’s Quest line has been changed to Blue Slime instead. Saffron also mentions that you can acquire two Bombs to easily defeat the Slimes by completing a side Quest from the NPC at the Goblin Mines.
Incidence of Rainy Weather has been slightly decreased.
Cheat sheet for getting more Coins has been added.