Kingdom of Subversion is an adult fantasy rpg, where you take control of a half goblin outcast. Forced into exile from the Kingdom of Lumis, you join forces with the Queen of the rivaling kingdom, Queen Selvana of Umbrus. She grants you new power, that will allow you to subtly infiltrate Lumis and begin to plot its demise. With these new powers and your body transformed into a human, your mission is simple, but will require great skill. Become a well known name in the land, become a hero. Use your influence to infiltrate Lumis’ royal court. Subvert them to your will and with that, gain access to Queen Roserra, ruler of Lumis. Then the final stroke can be delivered and Lumis is ripe for the taking. 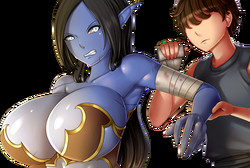 – Added a UI menu for selecting your route (Corruption, Domination or Stealth)

– Added a night mode (interaction just outside the inn)

– Enemies now give experience, and experience leads to upgrade nodes

– Command dialogue is now displayed in a pink / purple colour.

– Also note mouse support isn’t really available at the moment as I look at a long term solution for some of the teething problems with it. I suggest playing with the keyboard if certain things aren’t working with a mouse.

– Added in a gallery on the start menu

– Properly fixed the upgrade nodes (and when you gain them)

– Orc, Captain of the Guard, Shel has a very minor interaction