You used to go fishing with your father ’til one day you both got caught up in a storm. After being swept off of the boat and away from your father you woke up on a strange Island There you were found by a real beauty who you later married and had a daughter with. Now not remembering the past, because of the accident, you are trying to recall the events that led you there.​ Changelog: Keep in mind that this is not the complete V0.09 release, it only features the new characters and systems, the rest is coming soon. 3 New characters + interface system. (Corynn, Rayne, Daisy Kleo interface and new reward system. Added market system for Neko Coins. Added system to change character wearables for the interface. Added two new wearables obtainable in the market. Added 3 new songs, 35 animation files, 181 scene images and some sound effects..​ 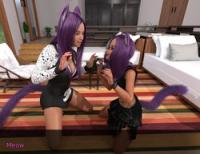